Welcome on the main page of the Federation Starship U.S.S. Callisto, an Azura class starship with registration NCC-95905 that is in command of Captain Calyssa Aelyn.

After the decommissioning of the previous vessel called Callisto, Starfleet Vice Admiral Daniel West arranged that one of the five first batch starships of the Azura class would bear the name. He did this as a favour to one of his subordinate Captains who has accomplished good work under his command. Though Starfleet Operations generally does not grant favours like this, Admiral West called in some favours to get it done.

The Azura class project was expedited to completion when the GYor war started in a distant region of Starfleet controlled space known as The Reach. San Francisco fleetyards dedicated an entire construction team to it. The ship was originally designed with the idea of having a fully equipped science vessel, able to do long range surveying missions but in contrast to previous ship classes, the Azura class would be well armed to defend itself when no other allied ships are around. Many design-concepts that were used in the Intrepid, Luna and Vesta class were combined to give rise to the Azura class. Commander Roland Hart was the leading design engineer who led the project.

The first ship, U.S.S. Azura (NX-95901) completed construction in the year 2390. After a thorough prelaunch test-period, the ship was launched in the early months of 2391, after which an extended period started that was about to last 15 months. Commander Hart went along during the entire shakedown mission to be able to implement immediate changed to the design in case it was necessary.

The second and third ship, U.S.S. Niobe (NCC-95902) and U.S.S. Tiger Lily (NCC-95903) were launched in 2392 after the spaceframes were upgraded based on the results from the first months of testing the U.S.S. Azura. The fourth and fifth ship, U.S.S. Guinevere (NCC-95904) and U.S.S. Callisto (NCC- 95905) were launched halfway 2393 when the shakedown of the U.S.S. Azura was completed and thoroughly evaluated. All five ships were sent to the most remote frontiers the Federation operates at this time. The Azura and Guinevere were sent to serve the exploratory missions in the Beta quadrant’s Orion’s Arm, Tiger Lily was assigned to operation Full Circle and Niobe was to explore the Fringe, a distant region in the Alpha Quadrant, while lastly, due to the influence of Admiral West, the Callisto was assigned to the Chozo Expedition, centered in the Nerey’N system. To be able to serve in The Reach, the vessel was outfitted with the latest issues of the jump gate interface grid, allowing the ship to use the Chozo jump gate network throughout the Gamma and Delta Quadrant.

The Azura class U.S.S. Callisto is the sixth ship to bear the name Callisto. Before this ship several others bore the name: 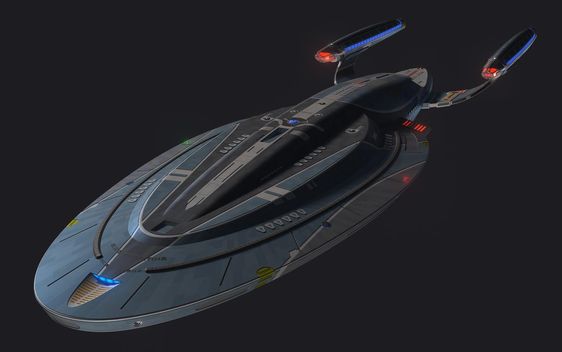